I did not know this, but my cousin Darlene told me Aunt Dottie dabbled with reupholster too. I can totally see her doing that. Maybe she was the guiding hand in this project?

This chair will forever now be referred to as the "red" chair. I like to think it's happy with it's new look after screaming for years, "Someone make me pretty again!" 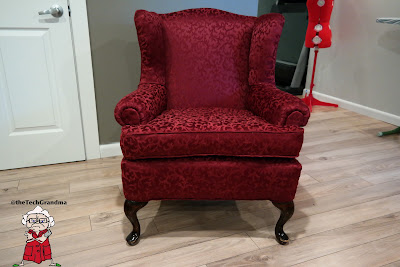 I may have covered this in the post I did on the brown chair, let me reiterate if I did. When we finished the basement, I started looking at furniture. 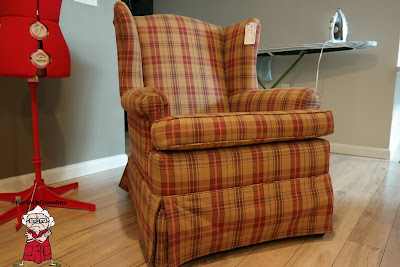 Should I buy new furniture for the upstairs and move the old stuff downstairs? When I looked at the cost of new furniture, I felt queasy. We paid a lot for the living room furniture and it's not in the greatest shape just 5 years later, even taking into account we don't have small children anymore. 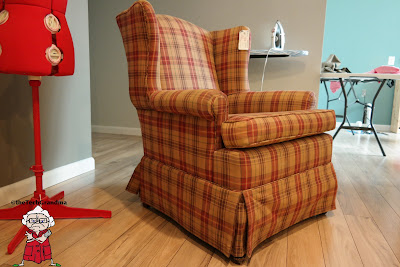 So while strolling through Habitat for Humanity Restore in Ann Arbor, I came across some chairs I liked. This one was $5, I got it during a half off sale. 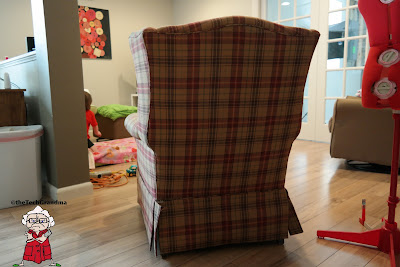 Burke really liked it because it felt solid to him. I tested it to make sure the frame was good by trying to twist it. Yep... solid. 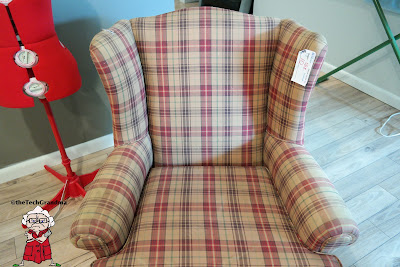 We took it home and began to pull the fabric off. If I had to guess the age of this chair, I would say somewhere in the 1990's. I did find a receipt for some Chinese food in it that was dated in the year 2000. 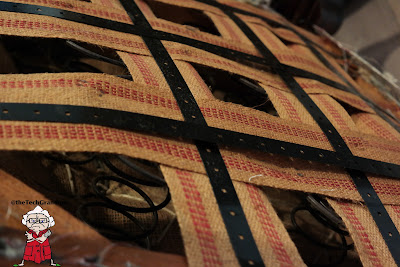 The trick is to reverse engineer it. Removing each section and retaining the old fabric to use as a pattern. I started at the bottom, removing the dust cover. 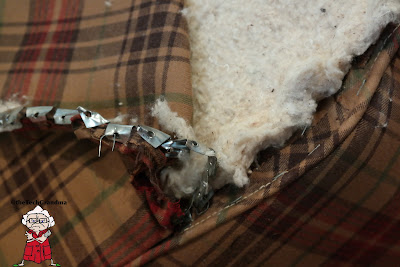 I then moved to the back and sides. They used this item called curve ease and I did the same. I ordered some immediately. In this stage of the project, I lost my helper - he was done. 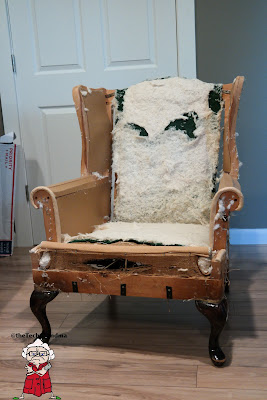 I took off the first layer of fabric and discovered the foam, cotton and under fabric was really dusty from years of use, so I took off everything. 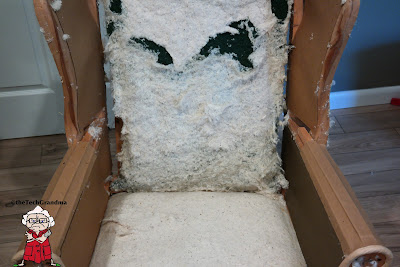 Normally you would just take off the first layer to keep costs down, keeping some of the cotton/foam. However, I thought .... if I truly screw it up - I'm out $5, so everything came off. 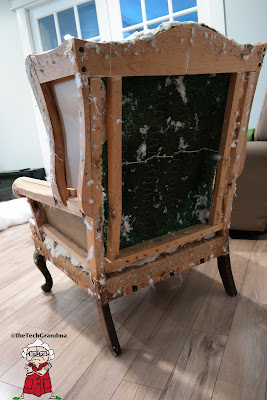 There were 3 layers of foam and fabric on this chair and about 3.2 million staples. OMG, the staples. I started out using a hammer, small screw driver and pliers, pulling out most of the staples. I ordered a couple of tools online to help, but really ... these tools worked the best. 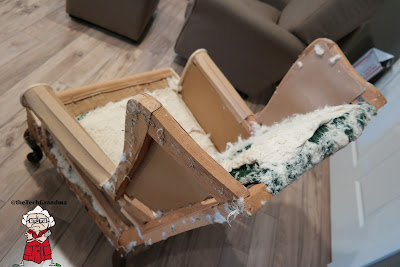 I actually found it quite calming hammering and yanking those staples out. It took me nearly a week just to get it down to the bare bones. I got to spend a Sunday and nights after work on it. 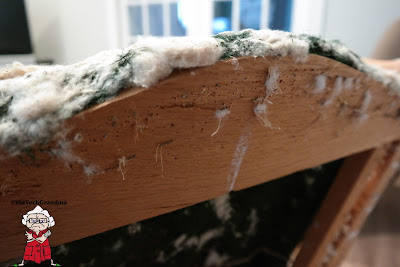 This might be a better indication of the amount of staples there were. Rows and rows right on top of each other. Someone was staple gun happy. Once I thought I was done, I went back over everything with a hammer to make sure nothing sharp was sticking out ... ready to eat my finger. 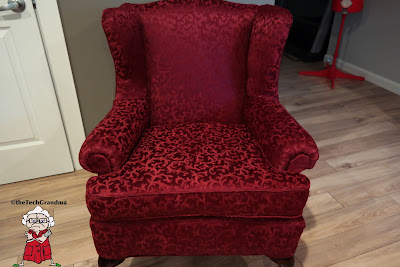 Things I ended up ordering was new cotton, some foam and a new staple gun. Burke's mom had given us the electric one his dad used before his death and I tried using that but soon wanted to advance to a compressed air staple gun. I found a decent one on Amazon for about $30, 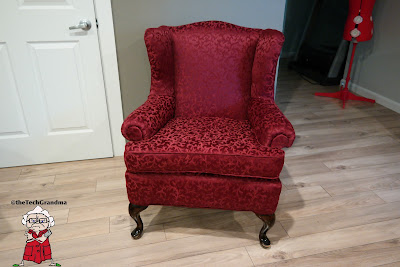 Eileen and I went shopping at Joann and she talked me into getting this nice soft red fabric. It was $30/yard. Ouch! Some websites suggested that I would need 7 yards for a chair. So I dug out a 50% off coupon for Joann's and bought 6 yards. So this was the biggest expense, this and the cotton and foam. Six yards did it all and I had some left over. 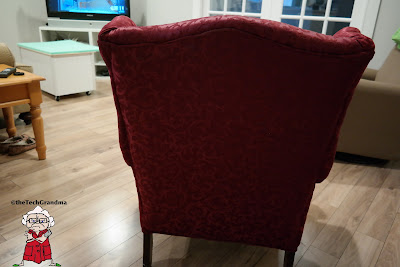 At this point, I'm into the chair for a weeks worth of time and about $200 in materials. I could have saved money by using cheaper fabric and reusing more of the underlay - but hey .... go big or stay home. I used scraps of upholstery fabrics for the under layer, which was nice. Finally got to use up some existing fabric. 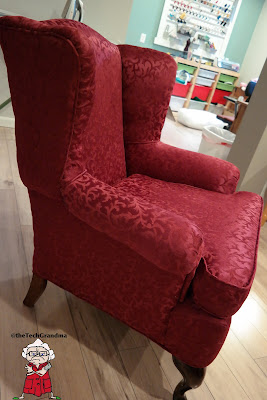 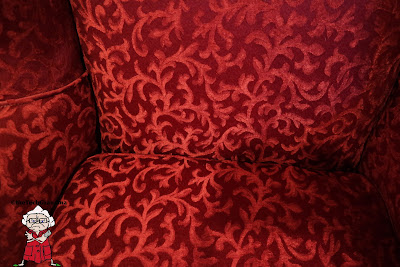 I finally put everything back together and made the cushion cover, reusing the zipper and cording that I pulled off the chair. This took another couple of weeks, working part time on it. 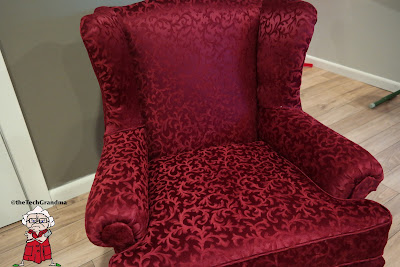 I watched some YouTube videos on reupholstering, but this one was particularly helpful and I even bought some supplies there.

How to reupholster an armchair

I really enjoyed the process and it let me use other skills I've developed over the years like woodworking and sewing. I'm definitely putting this one on the list of  "Things I want to do to make money when I retire". Plus, I got to take something old and make it new again - saved from the landfills. THAT makes me happy.

Posted by theTechGrandma at 6:56 AM

Email ThisBlogThis!Share to TwitterShare to FacebookShare to Pinterest
Labels: #makenewagain, #recycle, #reupholster, #reuse, how to reupholster a chair, wing back chair