Would I recommend Josh Doyle Homes?

So the real question is at the end of the day, would I recommend Josh Doyle Homes out of WhiteHead, Ohio? Not in a million years. And here's why:

Let's back up a moment and talk about the whole process from beginning to end. We made an appointment with sales and by the time we walked through the gorgeous model home, we were hooked. We had built a home before and the builder had completed it within 5 months - it was such a smooth process, so what could go wrong? Our existing home search had turned up empty with every single home having something not quite right about it.

Building again it was! The time was June, 2019 and the big question I had was, "will we be in our new home for our 25th wedding anniversary?" Absolutely! was the resounding answer - you'll be in WAY before then! Although ..... the verbal agreement was spoken, nothing was in writing. My very first mistake.

The sales process went smoothly and our estimator Jill worked closely with us to estimate everything our hearts desired and we thought we had a pretty decent budget with lots of fluff to be comfortable. Afterwards was the production meeting with our field coordinator, Scott - where we went through the prints and identified where the utilities would go and house print items. Nothing eventful.

I had already written our how our timeline had been devastated with our driveway permit and the removal of some strategic black walnut trees. It was January 13, 2020 before one hole was dug. 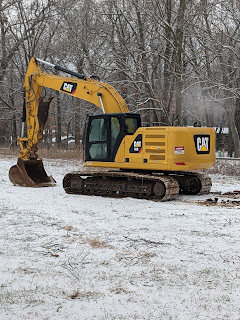 It was a unusually warm winter and things were cruising away until March when everything again screeched to a halt. COVID-19 had hit. They had just moved in the drywall supplies when everything stopped.

Our lease had run out on our apartment and we found ourselves moving into a temporary location closer to our new home. We spent the days driving to the house and wiring it for home network and coax cables.

After the ban for construction was lifted, progress was slow - very slow. There were times the house sat for over a week without anyone doing anything to it. Subcontractors were in no hurry to return to work, especially when they were driving from Ohio.

Our rental agreement had expired and the house still wasn't done. The landlord had given us an additional month but he had found a full year rental and was anxious to have her move in. We were homeless. At least we had options, we move into a hotel for almost 2 weeks while we wanted for our house to finally be done.

Time was ticking away and no one seemed to care that we were living day to day in an hotel which was not cheap. The guys building our barn said someone would show up for a couple hours and then leave. The amount of waste was staggering and time was passing by. In the meantime, installations were done incorrectly and had to be redone. Questions were left unanswered and cries for help went unnoticed.

And then the bills started coming in. 1 week before move in suddenly we were short almost $10,000. I had budgeted everything down to pennies and now .... our budget was shot, our timeline was past, and we were on the verge of being homeless. And no one cared.

We lived some time in our cars outside our beautiful home until we finally got our certificate of occupancy. No one seemed to know the entire process of anything - it was fill out an application, wait. Have someone review it and tell you that something else is needed, and wait. Do that, and find another issue. I really thought I would lose my mind.

We finally moved in officially, August 19, 2020, after 14 months with 2 temporary moves, a lot of frustration and a pandemic.

So, would I recommend Josh Doyle Homes? Nope - not in a million years. I could never get them to disclose any costs to me. I made multiple attempts to reconcile costs with the account coordinator to figure out exactly how I would land at closing. My expectations were clear and I tried very hard to get costs defined. I had costs to cover for the outside of the home and we had a very tight budget. There was ALOT of sleepless worried nights. They were constantly blowing smoke up my ass and they really didn't care one way or another.

I managed everything outside the home. The septic, gas, electric, driveway, and water. Not only did I do that - but I managed most issues with selections. We finally moved in and my house was STILL ISN'T DONE!! I moved in with finishing that still needed to be done.

The basement bathroom was fun. It was framed wrong and they found out when they came to install the shower. So they ended up ripping out the bathroom framing and redoing it. And this happened, I shot this video on September 2, 2020.

They did figure out they could replace the toilet instead of an oval to a round one and the door just clears it. But not even a year after the build, the seal on the toilet has come apart and it leaks.

Not only would I not recommend Josh Doyle Homes, I would never build again. Take my advice, if you do want to build make sure:

Not a happy camper at all. Of course, it doesn't help to build a house during a pandemic and believe it or not, I'm giving them leeway for that - but there were so many problems, unanswered questions, missed verbal deadlines and at the end of the day, I'm left holding the bill.

Posted by theTechGrandma at 5:01 PM No comments: