Harwood Farms had it's annual HOA meeting and Burke and I as responsible owners in the neighborhood attended. What we heard was bickering and complaining about how tacky the bird feeders were in the berm. Seriously? At that moment I was really glad I didn't live near the berm - because I'm not sure how bird feeders can be considered "tacky". I left feeling very disappointed and sad.

And when we were planting our flower and vegetable gardens and left our our wheelbarrow overnight to be met with a notice that a fee would incur if not put away, it was the last straw. We have divorced ourselves from the HOA and the neighborhood.

My daughter was graduating high school and I had been selling the idea of moving out to the country - getting 10 acres or so with room to breathe to my husband, Burke. Turns out after all that - the sell wasn't hard. Saline has great schools and along with that came great amounts of property taxes. Plus since we were about to become empty nesters - the great school district was no longer the priority.

We called my niece Amanda who put the house on the market. It sold in 12 days (yea I loved that part).

The search began for the new homestead and we combed all the nearby areas. The requirements were:

We started looking for an existing home but always found something we didn't like about it. It was too old, wrong layout - and often slow internet. The hunt took a few months and we came up empty.
We had built our house in Saline and our builder was amazing and within 5 months we were in a new home. They took care of everything and the cost was reasonable - little or no effort. Should we build again?
Browsing through Facebook one day, I came across a builder name in which my niece had "liked" and now it appears in my feed. Josh Doyle Homes - I contacted them. I also contacted my nephew but learned the news that they would be moving to Montana so he wouldn't be available. I really wish the timing could have been better as I would find out in the days ahead with my new builder - things were about be become dire. More about that later.
We had chosen Josh Doyle homes for our next build and set out to find some vacant land. We looked in nearby townships and counties and often found our #1 priority to fall short. Slow or no internet. There has to be something I'm missing.
I sat down at the computer and did some search for rural internet options (cellular or satellite) and found the options were not appealing with data caps or slow speeds. You can't do video conferencing with cellular - or rather you could for about a week, then data caps would apply.
Finally I came across a township that recently approved a mileage to fund a high speed internet infrastructure. Fiber optic usually runs along the street, and cable companies consider it not cost effective to run the cable to the homes - rural = sparse customers. So with the mileage, crews brought the fiber up to the houses - and viola! High speed internet! Lyndon Township in Michigan - here we come! We found one of the few 10 acre parcels that met all the requirements, fast internet, paved road, and natural gas. 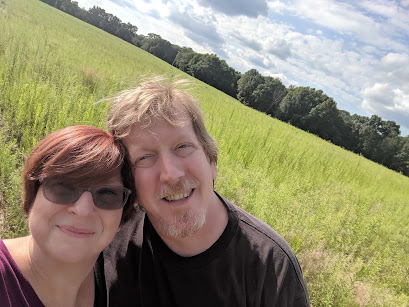 Look how happy we are! In June of 2019, we bought the land from Maryann Noah, which had been in her family since Andrew Jackson. She had the original deed from the homestead from Mr. Jackson himself. Kind of love that story.
Anyways - my blog will be about our journey for room to grow, becoming urban farmers, using technology to enhance our lives, and beginning the next chapter of our lives.
And on this day - we were so optimistic about the future and excited to get going.
Posted by theTechGrandma at 5:19 PM No comments: