Dad picked the 3 of us girls up from the various places we were living (Kentucky and Ohio) and brought us to Michigan in 1978. Even after all those years, never have I been to Mackinaw Island, so the plan was made after signing up to attend the Karsnick Family Reunion of 2016 in Traverse City. 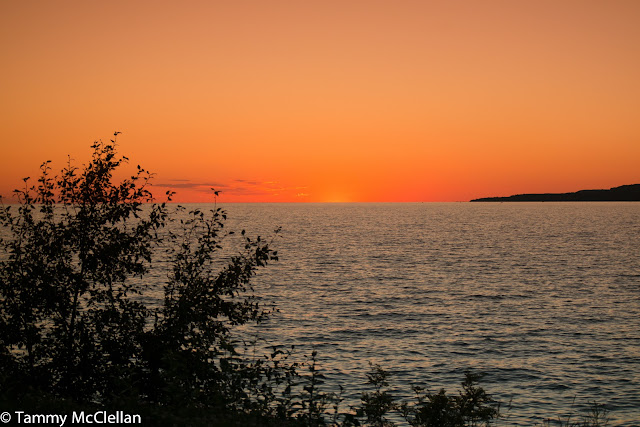 During our week vacation, we stayed in Frankfort, Michigan and after a very long day at Mackinaw Island we started back to Frankfort - nearly 3 hours. When the sun began to set, we stopped at Little Traverse Bay to snap a few sunset poses. I'm starting the post with this picture even though it was the end of the day cause it's one of my favorites. 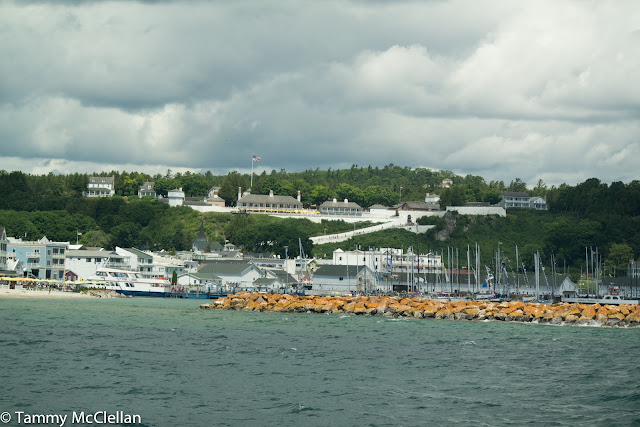 You buy a ticket to ride the ferry from Mackinaw City to Mackinaw Island for roughly $25/person. 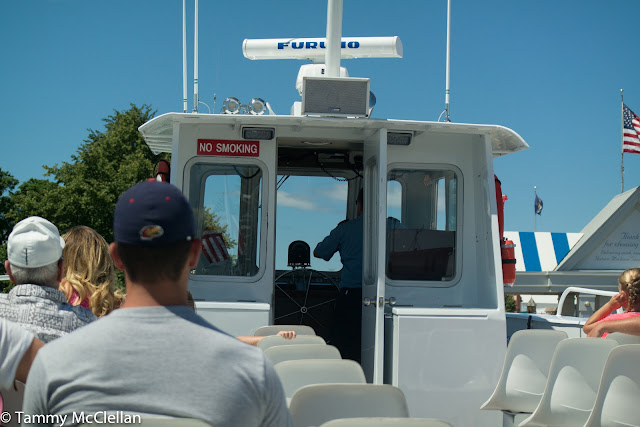 Shepler boats were new and fast. The entire ride took about 15 minutes and was very enjoyable. 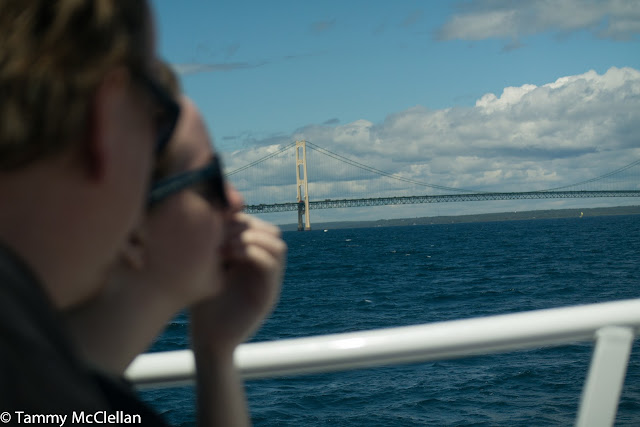 We passed Mackinaw bridge on the way, which was majestic in itself. 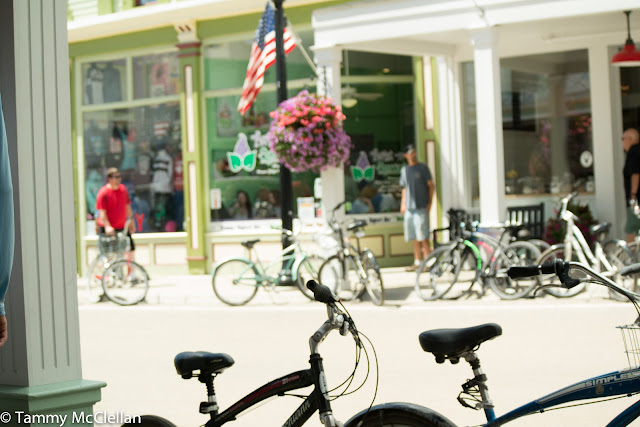 Once on the island, we looked for a place to eat. The island was packed, but we finally ate at the Pink Pony which had a nice view of the marina. 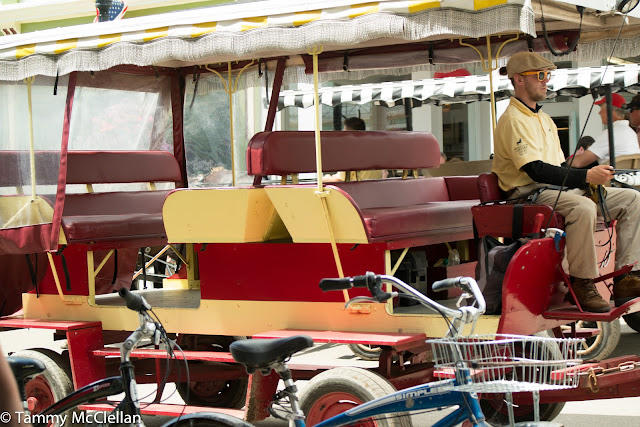 No motorized vehicles are allowed on the island. Your journey consists of either a horse or bicycle. 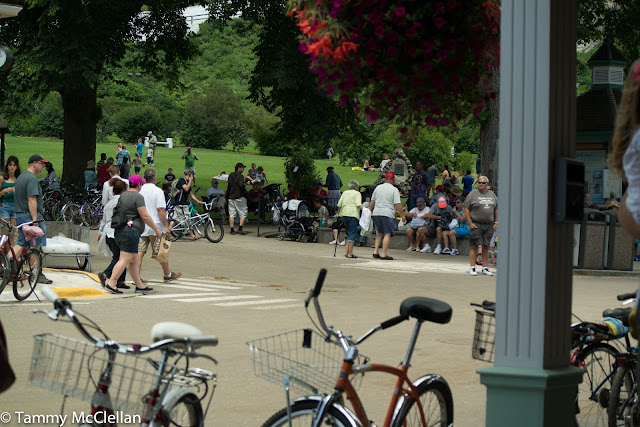 So many people and bicycles. 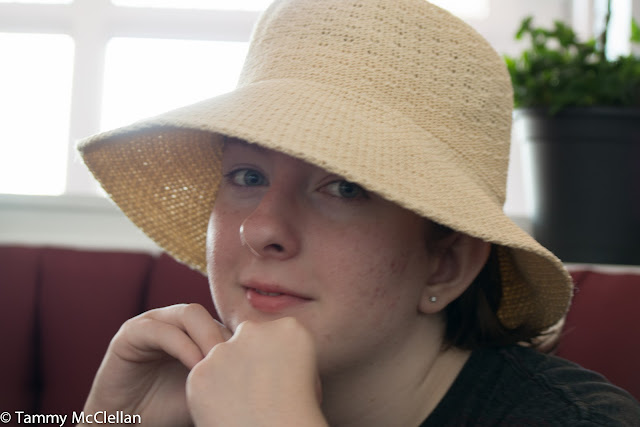 Lunch at the Pink Pony waiting for our food, we passed around my hat and did some poses. 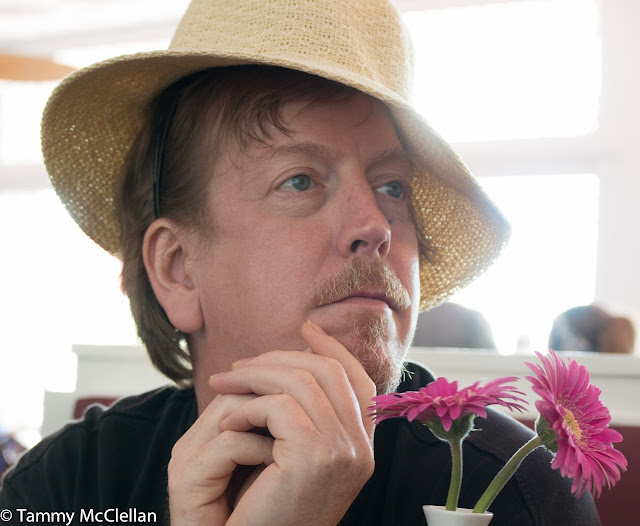 Burke set up this shot himself and posed with the flowers. Goob. 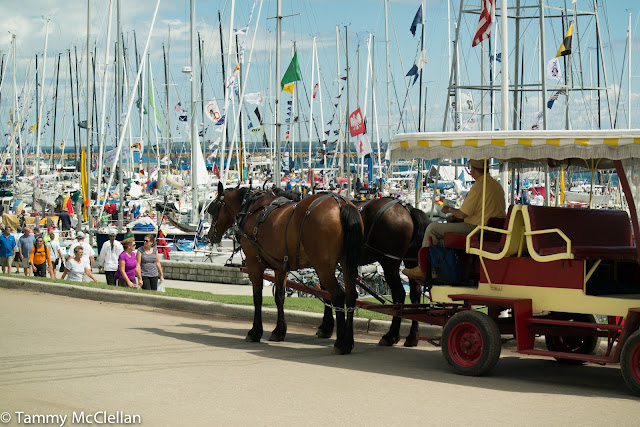 The marina and horse drawn carriage was a great picture. Julia is studying flags of the world and was happy to see so many flags displayed. 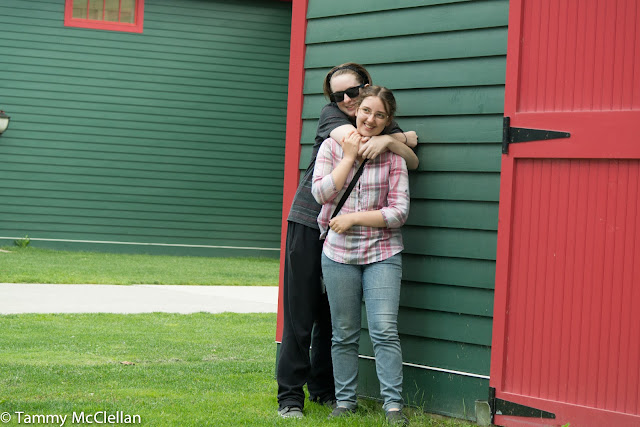 At the horse stables during one of our stops. 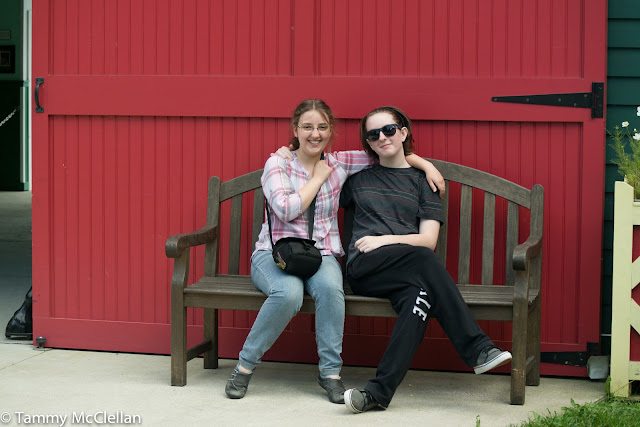 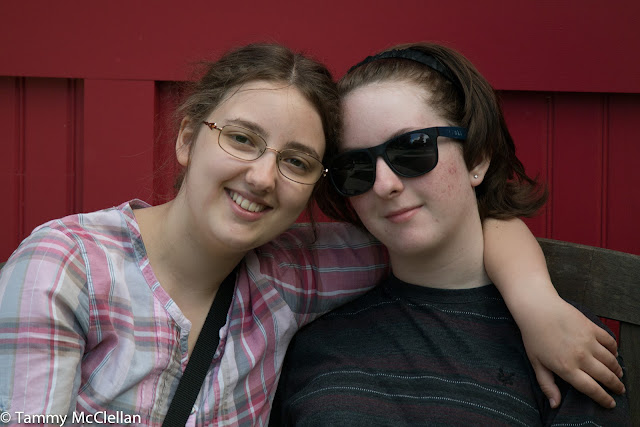 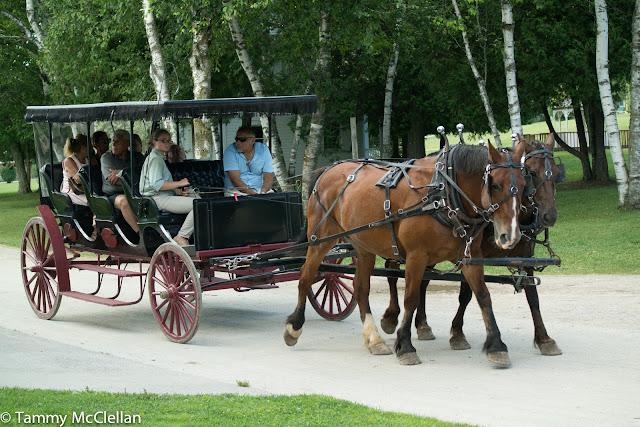 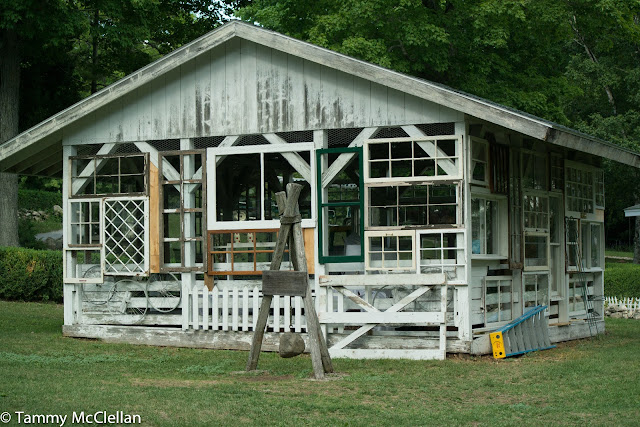 The coolest building I've ever seen. The walls consists of doors and windows. It was mesmerizing. The Indian rock, I wish I had captured what it said, but something like "if the rock is warm, it is warm, if the rock is swinging back and forth, it is windy...." 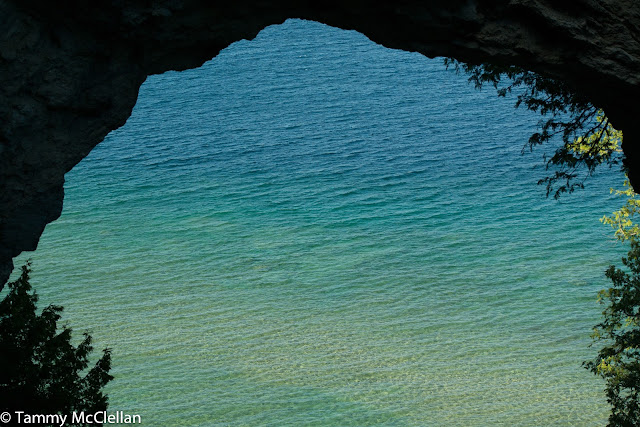 Our second stop was at Arch Rock that had a lookout built that rested on top of it. 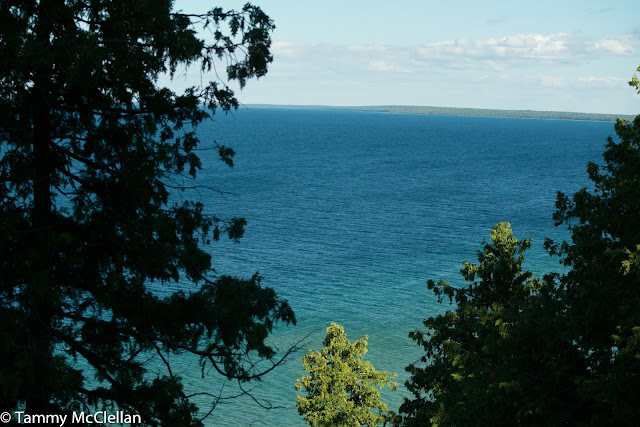 The fear spread over my body but I went. 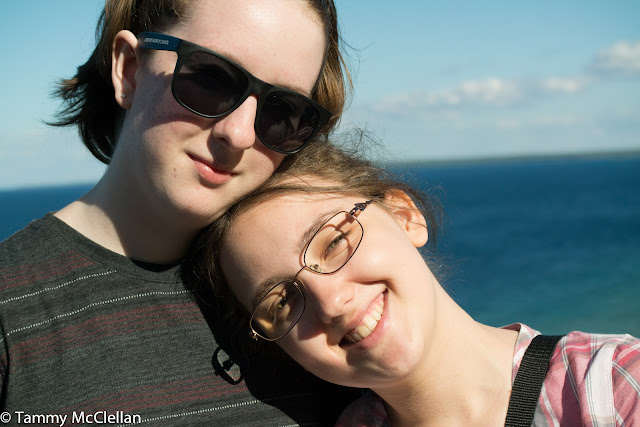 While these two were fearless, being up so high didn't phase them at all. 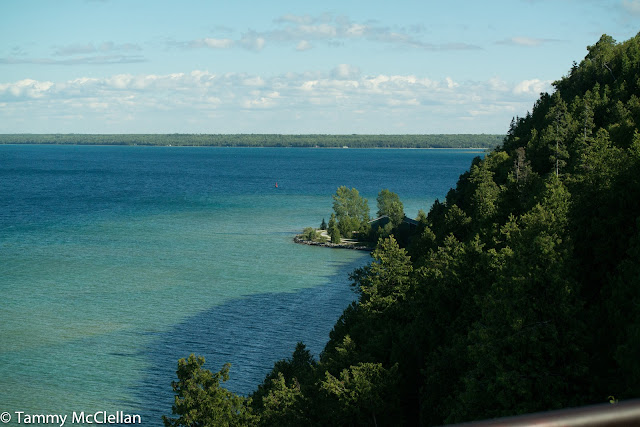 The views were totally worth it. 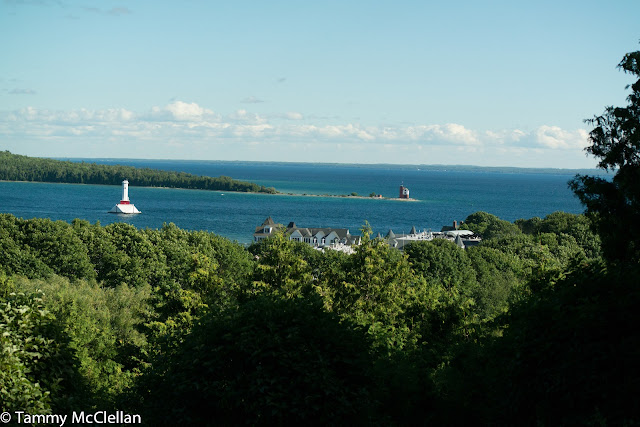 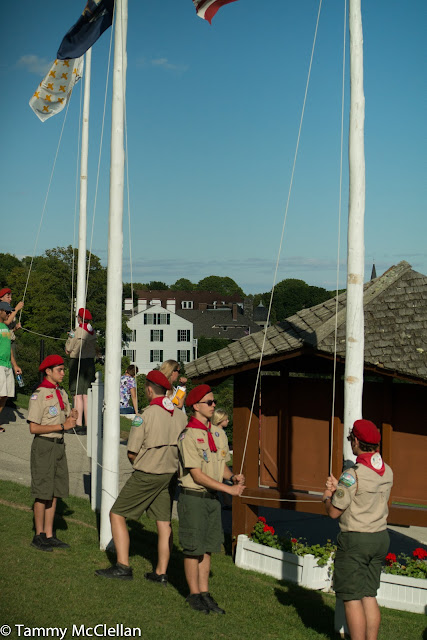 Boy Scouts were posed to lower the flags at 6PM in amazing ceremonial fashion. 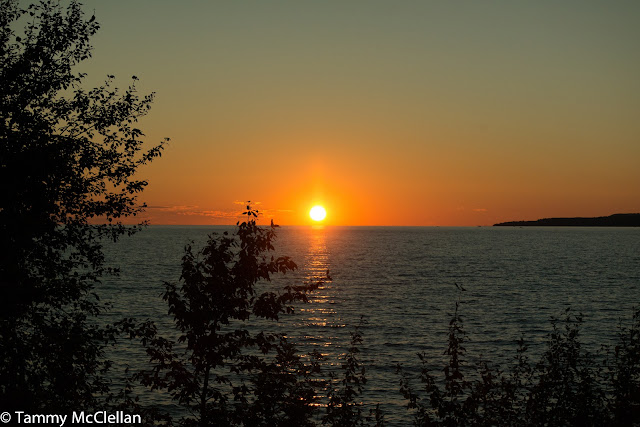 Now we're back at the end where we started. Sunset at Little Traverse Bay. An amazing day. Really had a great time sightseeing.

Posted by theTechGrandma at 8:58 AM