Back in the summer of 2015, I began to see Girls Who Code presence on Twitter. I became more and more intrigued and finally decided to see if I could start a club in my hometown in Michigan. I remembered walking through an open house at the high school the previous year and seeing a programming club sign on a table with nobody manning the table and no one around. Sad ... I thought. With all the technology in use today, you would think it would have more of a presence.


The first thing I did was get in touch with the high school to see if they interested in sponsoring the club. Since all the clubs were ran by students, they graciously declined. I then went to the superintendent Mr. Steve Laatsch who was very excited to sponsor a club in our district.

Now that I had a sponsor, what I needed was to actually become a Girls Who Code instructor. You had to pass a background check and also an exam. The test was somewhat of a challenge. Some of the questions pertained to computer science theory and in my 20+ years of coding had never seen and had no practical knowledge of. Since there were only 7 questions, every one was important. I passed it on my second try.

Mr. Laatsch arranged for us to meet in the Saline HS Media Center and have at our disposal 200 chrome books. Amazing! He also arranged for the club to be offered through community education and they handled the marketing and sign up. I just can't say enough nice things about Mr. Laatsch, he cares very deeply about our community and was excited to help me get this going.

The new community education program booklet arrived at my house and there it was! First page .... 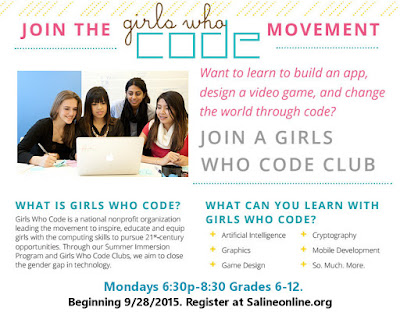 I immediately felt an explosion of pride. Cool.

Several weeks later I began to think about how the registration was going. I contacted the community ed department and asked them to give my access to the class registration. They did ...

I logged in, really just expecting a few signups and thinking about how to go about marketing to attract girls to the club. I hadn't even signed Holly up yet. I was immediately shocked and absolutely thrilled to see 25 girls had signed up and we still had nearly a month left for registration. O.M.G. I got up from my work chair and did the happy dance. Holy smokes!

After celebrating for a few few minutes, realization set in. Holy smokes .... how was I going to effectively manage a large number of girls? O.M.G.

I started recruiting helpers. The product manager of the team I was on at work -Steve Sobieski actually wanted to become a teacher at one point but changed to computer science in college. He has a great sense of humor and an awesome work ethic. He was totally in. Yes! Still I needed more, I felt.

Next I contacted our local Girl Develop It - Ann Arbor chapter and asked if anyone was interested. I got 2 additional helpers, Ronda Bergman, who is the chapter co-founder, and Karen Dickensen, who is a active participate. Both amazing women in technology and fun to be around. 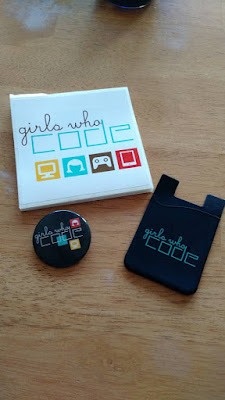 Headquarters sent us some cool swag ... and we were on our way! The only criticism I had is that there was just so much information sent by headquarters on curriculum and running a club - it was hard to keep it all straight and figure everything out. We did eventually figure it out and added our own flare to it.

It's now January and we've had an awesome time so far. We even inspired Ann Arbor to create a couple chapters in the area. They came and sat in on our club and we've established a wonderful relationship with them.

Usually we start off with about 10-20 minutes of discussion about something related to computer science. I've found a tons of great short videos from code.org and youtube. Then we work on our modules for about an hour. This is the curriculum designed by Girls Who Code. We're actually fortunate to have all the girls at the same Level. The last 30 minutes is a fun activity and then we end the night with "standup". We get into a circle and talk about challenges or triumphs - or what kind of pie we like.

I should have written more on this journey - I feel like it's alot of info to read. I swear, I'll get better. Stay tuned to hear all about our community project.

Posted by theTechGrandma at 6:24 AM