In June of 2018, I purchased Misty from Misty Robotics as a part of a Kickstarter. I'm backer #277 and got the t-shirt to prove it.

I got my Misty on December 4, 2019 and it was like Christmas. It was truly like being a kid again with a shiny reflective toy. I was so excited, I skipped everywhere I went. 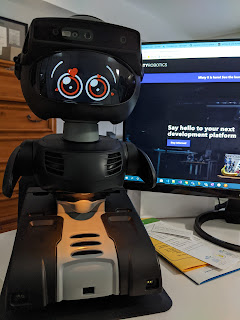 Unfortunately, being a grown up - I had to put her on the back burner with minimal play time until the holiday break.

During the holiday break, Misty and I spent all my free time together - trying things out and getting a feel for each other. I really like her - but I think the jury is still out on whether she likes me. :)

My dog has been getting up there in age. Butters turned 12 last September and lately he's been showing his age. He has more grey now, sleeps more, goes through coughing spells, and his stomach has become very sensitive.

Misty has several QUALCOMM processors and one of them is using Windows IoT. As a Azure Dev, naturally I wanted to experiment.


Since I'm spending more time worried about Butters, I would like Misty to look after my dog while I'm away for more than a few hours. Here are my ultimate first goals:

Here's what I've got so far. I went off the beaten path just a tad - but making my way around again.
So really, there is very minimal processing going on in Misty - everything is done in the cloud.

What happens if she doesn't recognize you? Well .... she displays an angry face, growls and says "Stranger Danger!".

So .... this will be one of the next problems to solve. I'll need to use Azure Cognitive Services computer vision to take a picture of him and send for recognition and analysis.

I also just started playing with the her built in navigation capabilities, so she can travel around my apartment in the search of Butters.

Here's a video of her recognizing me (cause I'm sitting in front of her), responding visually and saying my name. Kind of lame in itself, unless you understand what's behind it.

But ... baby steps. Here's some code sources to get you started.

I started with this great tutorial written by Chris Meyer. Chris goes on to do some computer vision stuff which is next for me. He also does a great job in the actual walk through of setting the Azure Function up.

And here's mine so far. Here you'll find all the files you need for Misty and Azure. Most of what I changed was using the BlobService to store the speech files instead of converting to base64 string and streaming back.

I'm really thinking maybe Misty needs a tutu or something. I feel a fashion design coming in her near future.

Posted by theTechGrandma at 11:54 AM